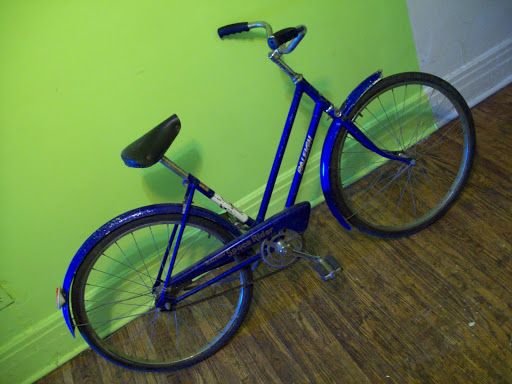 This gorgeous Raleigh Space Rider was rescued on its way to the dump by my good friend Stan the Man! It's a lovely 1-speed, backpedal-braked, tiny step-through cruiser that a long guy like me can even ride like a BMX... and it's light as a feather! I fixed it up and sold it at a garage sale for $75. If I were to sell the same bike now, being more patient about it, the price would be closer to $150. Maybe $130.
Posted by Dorian Douma at 5:21 PM 1 comment: 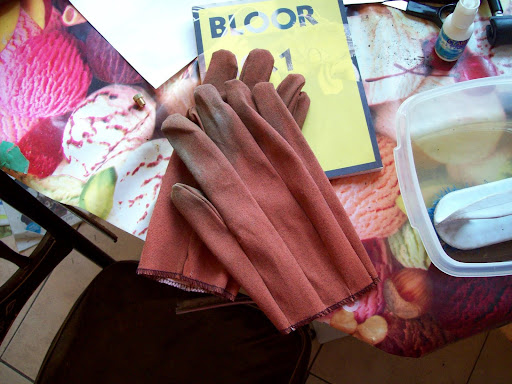 I hate getting my hands dirty. Hate it! And I also hate getting steel wool and bits of cabling stuck in my skin - what a pain! So I nabbed these babies from the hardware shop down the street - just over $3! They work nicely, but they do get dirty, so it's a good thing they're very washable. But I also recommend gardening gloves for heavier work.
Posted by Dorian Douma at 1:58 PM No comments:

The purple road bike and the white fold-up 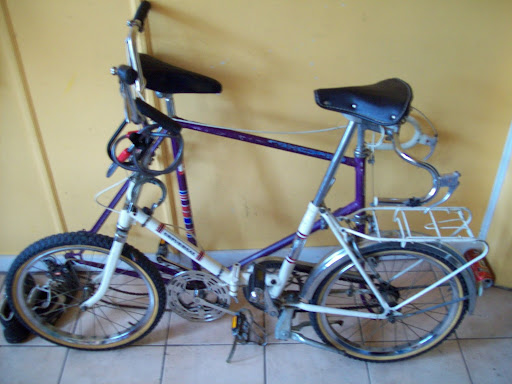 That there in the back is a gorgeous CCM Concorde in great shape. No repainting needed! It doesn't even need any steel wool work done, which is a relief - I'm sick of stripping and painting for now! I found some great steel wheels for it, complete with perfect tires. They're just in the sweet spot between road tires (too dainty) and hybrid tires (too beefy), and they've got some tread to them for grass but they're perfectly smooth on the road. I could have found aluminum rims to match the ultralight frame, but I'm sticking with my steel-for-real mentality, and I think it's going to offer the perfect amount of suspension and momentum. I don't want to make bikes that are too skittish!

And in front, we have a lovely Universal folding bike. What a gem! This baby just needs the front brake re-attached and the 3-speed hub fixed. Right now it's stuck in low gear. I hear that you're allowed to ride on sidewalks with these babies because of their small tire size - a rumor I'll have to investigate. Seems like the only way to find out the truth about that would be to go to court over it - even the police don't know or don't want to tell the truth about the laws, depending on which one you talk to. Sometimes they'll admit to not knowing about the law, and sometimes they'll just lie to cover up their ignorance, but when it comes to cycling bylaws, they're not really concerned with accuracy, so it's anyone's best guess what we're supposed to be doing out there. This is the only one of these bikes where I may just leave the rack on. I'm not sure. We'll see how it wants to be ridden when the gears work again.
Posted by Dorian Douma at 1:56 PM No comments:

More bikes on the build! 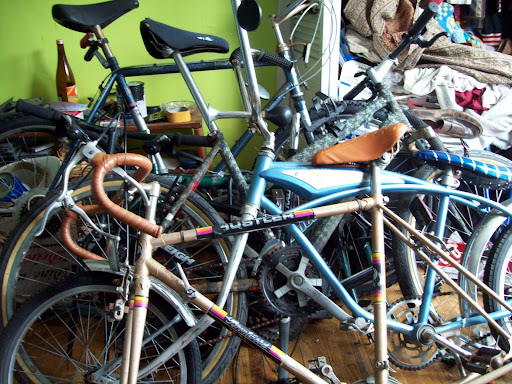 Just behold all this cycling goodness in the making!

Here we have, from back to front in the pile:

An old crackmobile of a mountain bike, just needs a tune-up and some cleaning up, and I'm going to cut them big wide bars down to city-size. Maybe I'll put some faster tires on it too, might turn it into a single-speed if it's fast enough, but hey, this could be my one and only mountain bike for people who want to trek through high park and do some offroading by the tracks or something.

That camouflage craziness on the next frame is actually tape. Somebody wrapped this monster, then dumped it next to a park near my place. I found some awesome big balloon smooth tires for it, rehabilitated the heck out of the drive train, and now I'm doing the same thing with the brakes. This is going to be the ultimate macho hybrid. Underneath it's red. I can't decide whether to remove the tape, I kind of like it!

The weird blue cruiser thing got converted in a very strange way, and I'm planning on stripping it down and turning it into a proper cruiser. I'm not even sure what tires this frame was designed for!

And finally, the superstar of the bunch: This Brentwood Hustler is another rescued-from-the-trash item that came with some great (after the rust was removed) rims with white-walled tires. The frame has a lot of rust damage, so this is going to teach me how to deal with that. My strategy is to aggressively sand through all the rust spots, then use rust converter or just get down to the bare metal, and then prime and paint those spots so that it's kind of spotted, like a leopard! I have a buddy who I think will suit this bike perfectly, so we'll see how he feels about the colour. It's gonna be a classic worthless, fast, sturdy road bike when I'm done with it.

Update: About half these bikes got fixed up and sold, and the other half got donated to Bike Pirates. So you may see these cruising around the streets of Toronto!
Posted by Dorian Douma at 1:50 PM No comments: 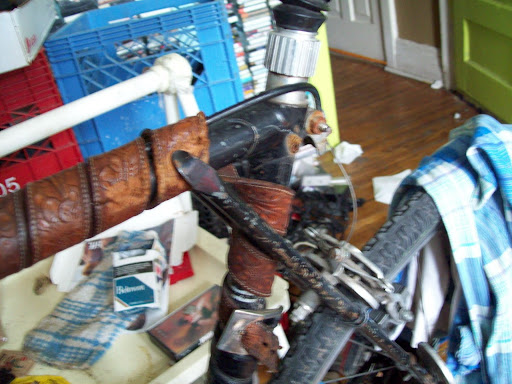 So here you can see not only how rad my big black stallion of a racer really is, with them belts and stuff, but also: this is what happens when you don't properly remove all rust and apply new paint to seal an old frame! After about a year of riding, this baby just broke on a bump. I was already safeguarding my builds against this by stripping and sealing the frames, but now I'm doing much more thorough inspections and preventative paintwork. I also went out and checked all the Douma Cycles frames that were out in the wild and fortunately none of them had any paint or frame issues. 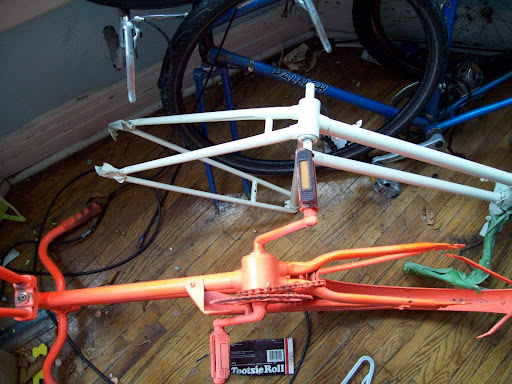 The white one is the green step-through 3-speed cruiser from a previous post! It's in "Recreational White" which is basically a white-ish cream. It's glossy but not glossy enough - so right now it's between clear coats. This baby's been put on-hold while I fast-track a couple of racing frames that already have buyers.

And the orange one is an experiment! I found it on garbage day just down the block, as-is. No wheels, no seat, just a frame, and I thought: Perfect. I shall use this to experiment with using fluorescent marker orange. I didn't bother to cover anything up on this baby. Even the chain is getting painted. Mechanical movement will rub off the excess paint and I'll find out whether that's a structurally-sound way to paint in the future. It's also between clear coats. The marker paint is not so stable, so I'm hoping that the clear coats will seal it down and keep it robust. This took two cans of marker paint (big cans) and there are a couple scratched-off spots (I can't handle this carefully enough!) so it might take a third!

I'm planning on replacing the grips with old belts wrapped around the bars! I've been wanting to try this for awhile. I wrapped belts around my own bike's top tube so that I could carry it more easily and it's so comfortable to hold that I can't wait to try it for grips! This bike will be suitable for a very small person.
Posted by Dorian Douma at 1:31 PM No comments:

Charlie's new racer, from me and Xenia 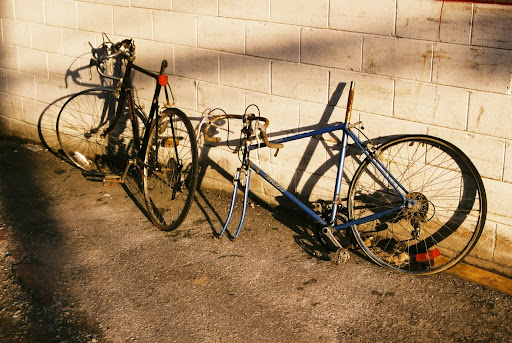 I used parts from both these abandoned beauties to fix up the one on the left - it was my first Douma Cycles bike! My friend Xenia did a big move and it was locked up to another bike in her garage after they cleared out. I cleaned it up but didn't rebuild the bearings or anything, as it was very smooth when I got it. This bike got stolen from Ossington and Dundas St. W. about a month after it was purchased, so now I'm including appropriate locks with the bikes I sell.
Posted by Dorian Douma at 1:24 PM No comments: 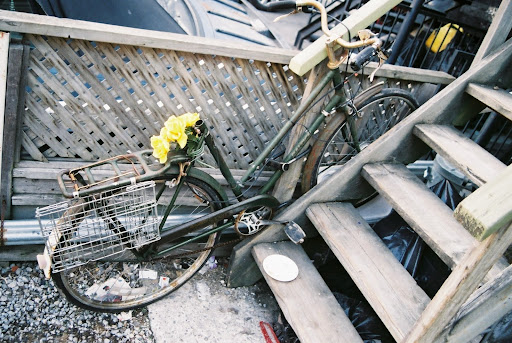 This is the last anyone will see of this bike in its previous form. In retrospect, I wonder whether I should have just clearcoated over this green. When I was taking off the surface to prepare it for painting, it turned a nicer green before I hit the primer, but I couldn't manage to get a consistency over the whole surface so I decided to just take it down to the primer and go from there. Now it's in the process of becoming cream and lime green. Very 2005.

I removed the rear rack and side basket, found a seat, and what I have to do after I finish painting it is fix one of the speeds in the 3-speed rear hub. Fixing 3-speed hubs is my next learning experience! Now I have two of them to deal with. I want to build racing bikes with them, so you get a classic road bike with the three gears that you need for commuting but without the derailers!

Here's what I got done during my first spring of operation:
Here's the bikes I'm working on at the moment and how ready they are:
Here's where I'm going with all this:

Posted by Dorian Douma at 9:34 AM No comments: