It's bold, it's beautiful, and it's the perfect city commuter bike: a 3-speed vintage thing of beauty, stolen from the garbage and, at this point, mostly fixed up. All the things the average cyclist wouldn't easily be able to do at Bike Pirates has been done: the drive train works. What it needs now is new brake cables, pads and housings ($10 and about an hour at Bike Pirates), a new longer steel seat post ($10 - $15 and about 1/2 hour install time), and a new bell, and it'll be good to go. At this point, it's $130, including the $40 Kryptonite lock I bought for it. I'm no longer selling bikes without locks included, unless the buyer can produce an acceptable lock for the bike. How's that for a sales policy? If I finish the repairs myself, the asking price will be closer to $180 - again, lock included. Still an amazing deal, but I do want to leave it as is for just long enough for any savvy cyclists to take advantage of their willingness to take it the rest of the way.

Note - these pics were taken before I installed the shifting system, so you don't see the shifter or the stuff that makes it work. But it does work. It'll need to be tightened a bit as the cable wears in, but that's an easy thing that you can do without taking anything apart. 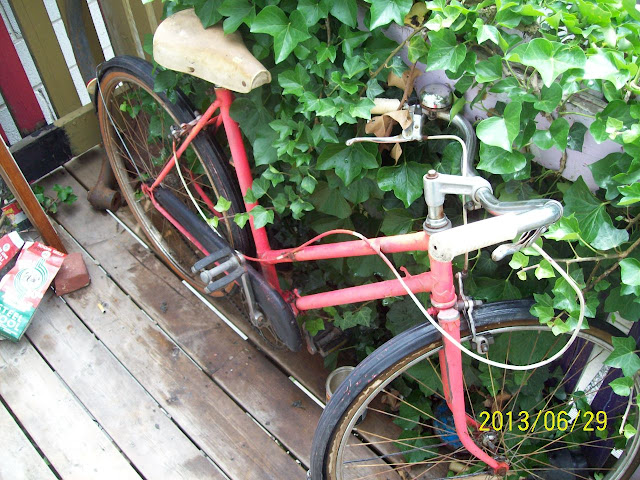 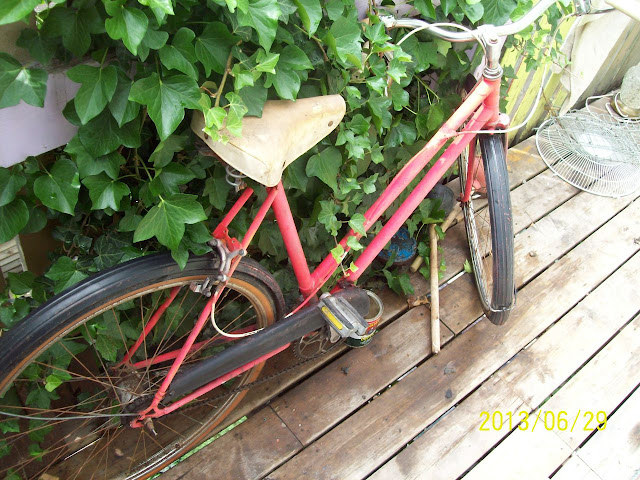 It's a beautiful machine, and it's in great shape, considering. The spokes will have to be replaced at some point, but I offer great and affordable wheel reconditioning services. I just replace spokes as they break, personally, and I can quickly teach anyone to do it themselves.

When it comes to convenience and performance, nothing matches a 3-speed step-through bike in the city. This thing will rock all year 'round and still seem worthless enough not to worry about. With this Kryptonite on it, you get a high-performance, low-value, low-maintenance city slicker mobile that will take you there, back and everywhere in between. This thing is a jewel of the garbage pile, and has many years of truckin' left in it.
Posted by Dorian Douma at 1:35 PM No comments:

"Although "step-through" frames have typically been marketed as women's frames in the USA, they're ridden by both men and women elsewhere. This type of frame is very convenient for utility and commuter bikes in urban areas where one may want to mount/dismount without swinging a leg over the back of the bike"

"Think about it, would you buy a car that you had to climb into, rather than step into gracefully, just because you were told that it was a ‘gents’ version?"

I've heard so many different excuses for why women should step onto their bikes and men should swing their legs over their back wheels. The long skirt one is the most common. The one that seemed most promising to me was that the step-through frame was designed originally for businessmen who didn't want to break their work pants, and then by the time women started cycling, men had switched to cars, and then after that it became a torch carried by marketing. It's a bit shaky as a theory, but it brings up a good point: using a diamond-shaped frame with any kind of formal wear, whether it's a long skirt or formal men's trousers, is a pain.

For me, the main differences between step-through frames and diamond shaped frames are:

There's so many gender studies things in play here, I'd rather just focus on the practicality: I think everyone should have a few bikes... well, of course I think that: I want to sell more bikes to fewer customers! But as a cyclist, I want the choice and I want the backups. I used to think two was enough, but now I want three:
Posted by Dorian Douma at 5:22 AM No comments:

After selling my first wave of bikes, I realized I was doing it wrong. There were a few types of work I couldn't do on my own, and didn't feel okay about doing at Bike Pirates, and pretty much had to do in order to guarantee the relative safety of the bikes I was selling. So I put my bike business on hold, while I got the tools and extra education to be able to do a complete and proper build. I also realized that there's no way I can just build up a bike and sell it right away. It's something that I need to do while riding the bike here and there, so that I do a build over a longer period of time, and all the bugs get worked out. I kept having to do follow-up maintenance after my sales, and it was the kind of stupid things that now I plan to catch during my extended builds. So now I plan to take a month or two to get a bike up to scratch, and then I can sell them with the knowledge that they won't need maintenance for a reasonable amount of time. This gives my customers a big value advantage over other bikes. Even brand-new bikes aren't ridden around between being built and being sold, so they usually require maintenance almost right away. Bike vendors even offer follow-up maintenance in their sales agreements, and I think that's an admission of failure. They should be able to sell each and every customer a product that doesn't need maintenance for at least six months, and the goal should be a year and a half. So that's my goal with my bikes. I even plan to lend them to friends so that they can be tested and tuned up over the period of a whole commuting season.
Posted by Dorian Douma at 11:34 AM No comments: