Finally, here's a great shot of one of the early Douma Cycles bikes.

This is one of those awesome Mixte (pronounced Mixtee) frames that are known as being for both genders and for both racing and commuting. It is fast - very fast. And smooth. This was the first Douma Cycles bike built entirely from scratch from nothing but a found frame. The frame was lying in some garbage in a back alley, where bike frames and parts are often left to die. Adding cruiser handlebars to it instead of road ones turned out to be a great choice. 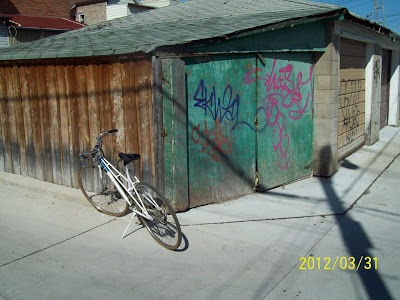 The original paint job was gray and blue, and the gray was replaced with neutral white and clearcoated into durability.

Because 10-speed road-bike parts are so easy to find, this came together quick and cheap. These steel 27-inch wheels are easier to trip over than they are to buy, because the popular thing to do is replace them with aluminum wheels. I know better than to put aluminum wheels on a steel frame, so this means I have an unlimited supply of old steel wheels that just need new spokes and some rust removal. The rust is, as in this case, usually just superficial. An old steel wheel will last longer, after it's fixed up, than a brand new aluminum one, and it'll have less theft value. A mountain bike seat and long steel seatpost completed this bike's transition into a total commuter, but the narrow road tires preserve its speed potential.

This was a custom build for a friend, and although it's needed some tube patching, it's been otherwise reliable for the two years it's been in service. According to the owner, it "practically rides itself" and is very, very smooth. It's been all over the GTA, and even the paint job has held up.
Posted by Dorian Douma at 6:08 AM