My "sorry for cycling" bike

My own beautiful main bike. I love it so much. I rescued it from the Beer Store in Little Portugal. It was tossed in the bushes with a broken chain, broken forks, no wheels, headset problems, bottom bracket problems, etc. But I knew its life wasn't over yet. After registering it with the local 14 division Police (who are super duper friendly about such things), I put my heart and soul into fixing it up to sell to a friend. Then, at some point, I realized it'd be perfect for me. Even though the frame was too small, I could make up for it with seatpost and handlebar changes. I'm still trying to get the bars in the right place, but as it stands now, this is the best bike I've ever owned. It's so fast and smooth, and it has a great feel. 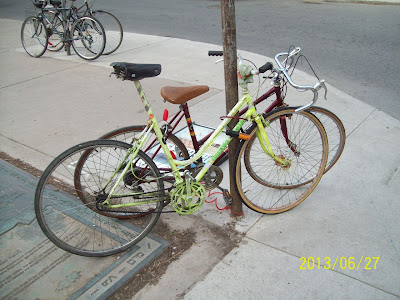 I did so much work to it. I fixed up the drive system, then messed it up, then broke it, then gave up on it and turned it into a ghetto one-speed (with the cassette still on) and then finally, finally committed and replaced the cassette with a normal rear freehub. The performance difference of having a one-speed is totally worth it! I also painted it pink and then green. Maybe I should have left it white. It did look good. But it looks good Green too. 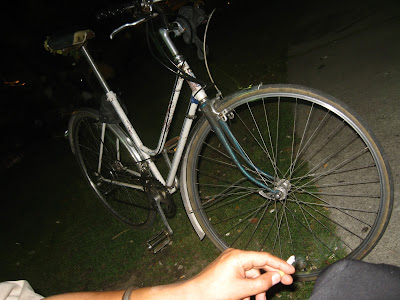 After awhile, I wanted to give it a name, or at least a title. So I wrote "sorry for cycling" on the side. It's kind of sarcastic, in that no matter what you do on the road, if you're on a bike, some driver will find a way to object and try to punish you for being there. But it's also genuine. I know that our infrastructure puts drivers and cyclists in conflict, making both much harder than they have to be. I also know that, since I switched from driving to cycling, I've been freed from buying enough cars and gas that at least one person has been put out of their job in the auto or oil sector. As cycling takes off, those industries are being affected, which is great, because they're very harmful to our public health, and they need to take a huge hit, but that hit doesn't just affect their corporate earnings: of course it affects jobs. The Auto industry is one of the last manufacturing opportunities for Canadians - which is also wrong and not my doing - but still, I am sorry to those who lose their job because I promote cycling as an alternative to driving.

But "Sorry for Cycling" isn't a name... it's a slogan. So I still want to come up with a nice model name for this thing. I was thinking I should label my bikes by their owner's name. At least their first name. But wouldn't having your full name on a bike have some value? I can't tell. I also wanted to name this something that indicated how quickly and smoothly it got me across huge distances... something like "portal" or "tele-" something. Nothing seems good enough. Naming things is hard.